The Neighbourhood Plan covers the whole of the Civil Parish of Oxenhope as indicated on the Boundary Map.

The Oxenhope Neighbourhood Plan Area was formally approved by City of Bradford Metropolitan District Council (CBMDC) in November 2013 in accordance with the Localism Act, 2011, and the Neighbourhood Planning (General) Regulations, 2012.

The Plan has been produced on behalf of Oxenhope Village Council in accordance with the above-mentioned statutory provisions together with guidance contained in the National Planning Policy Framework, ("NPPF") and Planning Practice Guidance ("PPG"), issued by the Department of Communities and Local Government ("DCLG").

The strategic planning policy background to the Neighbourhood Plan is provided by the adopted CBMDC Core Strategy (2017) and the emerging Land Allocations Development Plan Document.

The Neighbourhood Plan covers the same period as the CBMDC Core Strategy to 2030. CBMDC are in the process of undertaking a Core Strategy Partial Review (CSPR) which is expected to be adopted in 2022. The Oxenhope NDP has been prepared with the emerging CSPR in mind. 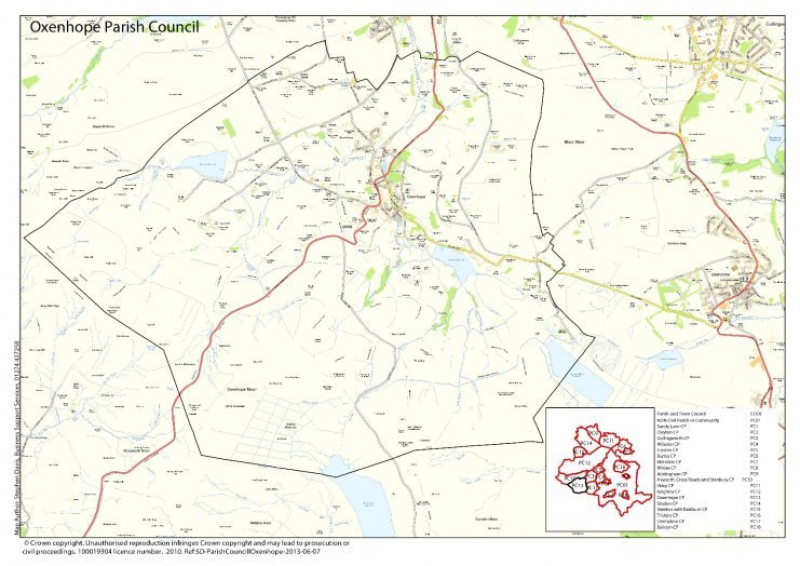 1.3.1 The first record of Oxenhope by name was in the 1191 Pipe Rolls. It is probable there were seasonal inhabitants as far back as the prehistoric Mesolithic period (Middle Stone Age) through to Roman and Saxon times.

1.3.3 Oxenhope derives its name from when it was used as upland grazing for Oxen and hop which means valley head in old English.

1.3.4 Evidence suggests that Oxenhope was a poor and dispersed agricultural community which focussed on livestock farming and the production and milling of its own corn. Peat extraction and stone quarrying provided materials for local use.

1.3.5 Handloom weaving and woolcombing on a domestic level spurred trade at local centres such as Halifax market. Early industrial mills were primarily located at the valley bottoms and the labour force, including workers, managers and millowners were all housed within walking distance.

1.3.6 There were two manorial sub-units, Near Oxenhope and Far Oxenhope. Lower Town and Upper Town were developed quickly in the nineteenth century in line with the growth of local industry.

1.3.7 The boom of the industrial revolution brought with it many new mills and substantial increases in housing to support the needs of the flourishing economy.

1.3.8 Oxenhope grew further as infrastructure connections such as the turnpike road was developed in 1816 and then again by the railway in 1867.

1.3.9 The village remained a small industrial community until well after WW2. Oxenhope was less affected by post-war middle class urban sprawl than other Pennine communities which meant artisan makers and unskilled workers were still able to afford to live in the village.

1.3.10 The population of Oxenhope, like many industrial communities has followed the rise and fall of industry over the last 200 or so years, At its peak the village had around 3,000 residents in 1851 and has declined steadily up until recently. In the late 1960s and early 1970s the local population began to grow steadily and it continues to rise slowly today to around 2,626.

1.3.11 Employment within the village is limited as businesses have closed or relocated in the last few decades. The majority of working residents commute to nearby areas such as Bradford, Halifax and Keighley, although there continues to be an increase in people working from home.

1.3.12 The Sue Ryder Hospice, Manorlands, and Pawson's Mill are two of the largest employers in the village. Other key sectors include agriculture and increasingly tourism and leisure.

1.3.13 A business register was compiled for the purposes of this Plan. It gives an up-to-date portrait of employment and facilities within the village.

1.3.14 The register shows there are 74 businesses operating out of Oxenhope.

1.3.15 The business register showed that there are 10 active commercial farms in Oxenhope, farming mostly pigs, sheep, and cattle for both beef and dairy.

1.3.16 There are 8 annual public events held in Oxenhope which contribute to the tourism and leisure sector locally.

1.3.17 Oxenhope has 26 different tourist accommodation facilities including Bed and Breakfasts, holiday cottages, caravans and a hotel.

1.3.18 Oxenhope has 4 churches and a community centre. All of these play an active role in supporting local groups and societies.

1.3.19 Oxenhope has an active number of sports, leisure and interest groups. A register was complied for the purposes of this Plan and found there were 29 active groups within the village. These groups provide activities for all ages and abilities.

1.3.20 There is a cricket ground, two football pitches, tennis courts, play area and a bowling green, within or adjoining the recreation ground.

1.3.21 The number of retired people in Oxenhope is growing, while younger people tend to relocate to find education, employment and affordable accommodation. This is evidenced in section 2 of the Plan.

1.3.23 The Primary School on Cross Lane is the only school in the village and older children travel to Haworth, Oakworth, Cullingworth, Halifax, Skipton, and Keighley. There are two early years centres and independent care providers.

1.4.1 Permanent agricultural settlement in Oxenhope occurred in the 14th Century with dispersed isolated farms exclusively on the well-drained south-facing uplands.

1.4.3 In the first half of the 19th Century the religious revival movement played a key role in the development Oxenhope which led to the construction of several places of worship and schools. This saw the creation of Oxenhope Parish in 1854 with its own Parish Church in 1849 and National School in 1846.

1.4.4 The second wave of textile production in Oxenhope around 1850 saw development take place lower down in the valley bottoms for the first time. By this time there was around 20 mills of varying sizes operating in Oxenhope.

1.4.5 The opening of the Keighley and Worth Valley railway in 1867 stimulated the expansion of Oxenhope, predominately in Upper Town and Lower Town, in the form of houses for mill owners and workers. The railway remains a popular visitor attraction and continues to contribute to the vitality of the village.

1.4.6 Leeming Reservoir was completed in 1878. The site was formerly home to two mills and several cottages.

1.4.7 Oxenhope retained its industrial function until the second half of the 20th Century and despite modern infill developments throughout the village it has been able to retain the character and appearance of a group of distinct rural and industrial settlements.

1.4.8 Within Oxenhope there are 44 listed buildings or structures which contribute to and define the character of the village. The Neighbourhood Plan seeks to protect heritage assets and ensure that new development within the village is sensitive to these assets. This will be achieved through both policy and design guidance. Residents who have engaged in the process feel it is important that the character of Oxenhope is maintained.

1.4.9 Within the Neighbourhood Plan area there are four Conservation Areas each with its own distinctive characteristics and qualities. This is due to the fact that Oxenhope has developed in phases over time as a series of settlements each reflected by different building types, settlement patterns and types of open spaces. Despite this, there is often overlap between each conservation area contributing to a distinct sense of place overall.

1.4.10 Leeming -Despite having only one listed building, Leeming has a consistent villagescape of late 18th and 19th Century development which relates to the village's industrial and agricultural functions and elements of its social history.

1.4.11 Groups of buildings in Leeming illustrate the changing function of the area, from agriculture, to home and farm-based textile production and later to mill-based manufacturing. These examples can still be seen today.

1.4.13 Bank Nook - Originally a pair of cottages but now one property, Bank Nook is the only listed building in the Leeming Conservation Area. Built in 1774 it features ashlar stone with a whitewashed front elevation.

1.4.14 Lower Town -19 Grade II Listed buildings of special architectural and historic interest are in Lower Town which date across four centuries. Different building types and styles of architecture were produced at different stages in the evolution of Lower Town contributing to a distinct sense of place.

1.4.15 There is a diverse mix of building types and architectural styles in Lower Town. This is in part due to natural architectural progression but also due to the social hierarchy of the mill village. Buildings range from high density, small size, repetitive worker houses to large attractive villas for mill masters and owners.

1.4.16 Upper Town - 28 Grade II Listed buildings are in this area including some of the earliest agricultural buildings in Oxenhope. It can be characterised by early mill worker homes and farm buildings with a handful of buildings from later dates expressing different architectural styles. This mixture of building types and styles helps to build the identity of Upper Town.

1.4.17 Station Road - Despite containing no listed buildings, in the Conservation Area there are a number of buildings which make an important contribution to the townscape. Oxenhope Station was the catalyst for development in the area in the late 19th and early 20th centuries. Many of the buildings constructed around this time have retained original features reflecting the architectural style of the time.

1.5.1 Oxenhope is an attractive rural community situated in the South Pennine Moors which lies between the Peak District National Park and the Yorkshire Dales National Park. It can be characterised as a sweeping landscape of upland moor and pasture. The moorland plateau gives extensive views over the lower-lying towns and settlements.

1.5.2 The landscape and topography has and continues to play an important role in shaping and influencing development in Oxenhope and its surrounding communities.

1.5.3 The majority of the plan area is green fields and moorlands, much of which is used for agricultural grazing.

1.5.4 The area contains a variety of designations due to the presence of important species of both plants and animals. This includes Sites of Special Scientific Interest (SSSI), Special Area of Conservation (SAC) and Special Protection Area (SPA).

1.5.6 Within the South Pennine Moors are important flora such as upland healthland (dry and wet), blanket bog (including uncommon cloudberry), old sessile oak woods and transition mires and quaking bogs.

1.5.7 There are around 80 different important species of amphibians, fish, insects, birds, mammals, reptiles, and plants in Oxenhope.

1.6.1 Footpaths, public rights of way and bridleways make a significant contribution to village life in and around Oxenhope. There are many footpaths in both urban and rural locations that are well used by residents and visitors alike.

1.6.3 These footpaths provide connections to the different settlements within Oxenhope and to the wider locality. They are important in enabling access to and movement through the surrounding countryside and support leisure, recreation and tourism locally.

1.6.4 A key objective of the plan is to protect, maintain and where possible, enhance these footpaths and other routes to make sure they continue to support life in and around Oxenhope for years to come.