2.1 The City of Bradford Metropolitan District lies on the edge of the Pennines. Within the District, there is a combination of the densely populated City of Bradford, with a large expanse of the internationally important Pennine Moorland habitat to the north and west.

2.2 This SPD relates to the South Pennine Moors, which are classified as a Special Protection Area (SPA) and designated as a Special Area of Conservation (SAC):

2.4 European sites are shown in Maps 1 and 2 and details of the qualifying features for the South Pennine Moors SPA/SAC are summarised in Appendix 1. As the maps show, there are also other European sites close to Bradford and while subject to the same protection are outside the scope of this SPD.

2.5 As a public body, the Council is identified as a 'competent authority' within the Habitats Regulations, and the requirement to assess the implications for European sites is applicable in situations where the competent authority is undertaking or implementing a plan or project, or authorising others to do so. A HRA (Habitats Regulations Assessment) considers the implications of a plan or project for European wildlife sites. It assesses any possible harm to the habitats and species that form an interest feature of the European sites, which could occur as a result of the plan or project being put in place.

2.6 The requirement for the HRA derives from the EU Habitats Directive and, notwithstanding the UK's withdrawal from the EU, UK law and policy remains currently largely unchanged. The legislation transposing the EU Directives has been changed so that they continue to operate effectively from 1st January 2021. The changes have been made by the Conservation of Habitats and Species (Amendment) (EU Exit) Regulations 2019.

2.7 The National Planning Policy Framework (NPPF) and Planning Practice Guidance (PPG) outline the procedure set out by the government that should be followed in deciding whether to approve a proposal (a plan or project) that will potentially affect a protected habitats site.

2.8 The NPPF recognises the value of our natural environment stating that the 'planning system should contribute to and enhance the natural and local environment' , for example by protecting and enhancing valued landscapes, establishing coherent and resilient ecological networks and providing net gains for biodiversity. The presumption in favour of sustainable development does not apply where development requiring appropriate assessment under the Birds or Habitats Directives or Ramsar convention is being considered, planned or determined.

2.11 The Local Plan Preferred Options document proposes the delivery of 30,654 dwellings over the new plan period of 2020 to 2038. This is derived from the latest standard method for assessing local housing need as set out in the PPG. It should be noted that the proposed housing requirement figure does not currently meet the additional 35% Cities and Urban Centres uplift as set out in Step 4 of the standard method within the plan period. This still represents a notable growth across the Bradford District of an approximate 14% increase in dwellings. With this scale of growth, there is likely to be a number of consequential risks to the moorland habitats and other biodiversity features, both within and in close proximity to the District.

2.12 This mitigation strategy is initially prepared using the adopted Core Strategy housing figures, whilst being mindful that the adoption of the Local Plan Review will lead to an update of the strategy.

2.13 The HRA reports for both the adopted Core Strategy (Cox & Pincombe, 2014) and the Core Strategy Partial Review (Hoskin et al., 2019) should be referred to for all background information leading to the requirement for a recreation mitigation strategy, which is formalised through this South Pennine Moors SPD. In summary, the HRA report for the adopted Core Strategy, and the subsequent HRA report at Regulation 18 stage for the Core Strategy Partial Review identified likely significant effects from the amount of housing growth proposed within Bradford on the South Pennine Moors SPA/SAC due to:

2.14 The HRA for the adopted Core Strategy (Cox & Pincombe, 2014) concluded that measures to avoid and mitigate for the potential increased recreation pressure needed to be put in place. The Core Strategy was therefore adopted with a dedicated policy, SC8, to this effect. Policy SC8 sets out the broad requirements for mitigation and sets out the need for this SPD and the zones within which it will be applied.

2.15 Background and context on the impacts of development on the European sites and the evidence for the zones used in SC8 are set out in Appendix 2.

2.16 In the review of the Local Plan policy SP8 will be updated and referred to as Strategic Core Policy SP11: Protecting the South Pennine Moors SPA / SAC and their Zone of Influence. 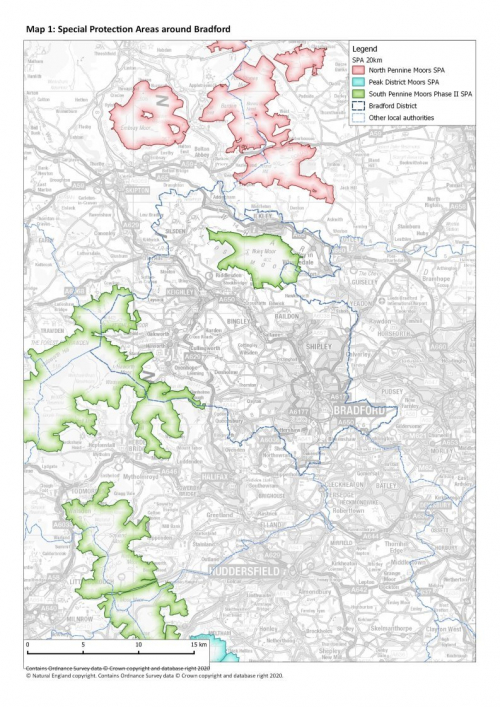 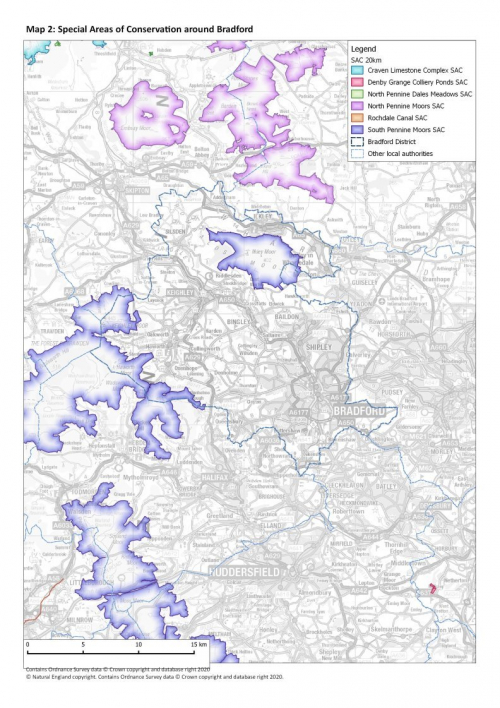