6.0.1 Excavations on Leech Lane led to discoveries of pottery, coins and elephant ivory which suggest Harden was once a Roman settlement around 150 AD. The first written record of Harden is in the Domesday Book of 1086 written as 'Hateltone' or 'Hateltun. Presently, there are some examples of buildings dating back to the 17th century with many more examples from the 18th and 19th centuries.

6.0.2 Harden, like many settlements in the area was predominantly home to agricultural workers, and later, mill workers. Many of these buildings are still

present today, although most now serve alternative uses, such as residential and have been altered over time, meaning many no longer contain all of their original architectural features.

6.0.3 The Neighbourhood Plan seeks to protect heritage assets, and supports their sensitive enhancement and restoration. Listed buildings and monuments are sufficiently covered and protected by national and local planning policy so these are not addressed in this section.

6.2.1 St Ives Estate is a 550 acre Grade II Listed historic park and gardens containing a variety of buildings of historical interest. The estate is highly valued locally and regionally as a place of recreational, ecological and heritage value.

6.2.2 St Ives estate is a Local Wildlife Site and is within the Bradford Wildlife Habitat Network. The estate comprises ancient semi-natural woodland, deciduous woodland, and lowland fens which support a variety of flora and fauna. Within the estate are locally significant artefacts such as Lady Blantyre's Rock and the William Busfeild Ferrand Obelisk Monument - two memorials built in honour of former residents of the estate.

6.2.5 The Neighbourhood Plan will work closely with Bradford Council and the many stakeholders involved in the estate, including the Friends of St Ives, a local group promoting activities on the estate, whilst aiming to conserve its traditions.

New developments will be expected to respect and protect non-designated heritage assets and their settings. The level of protection should be commensurate to the level of designation of the asset.

The following buildings and structures are to be included as Non- designated heritage assets (refer to Harden Neighbourhood Plan Non Designated Heritage Assets Assessment document for methodology and justifications) :

6.2.7 This policy seeks to protect heritage assets from development and supports their sensitive enhancement and restoration. 43 people felt the plan should include policies that promote heritage and conservation at the initial engagement exercises. This is a non-exhaustive list and may be added to in the future. 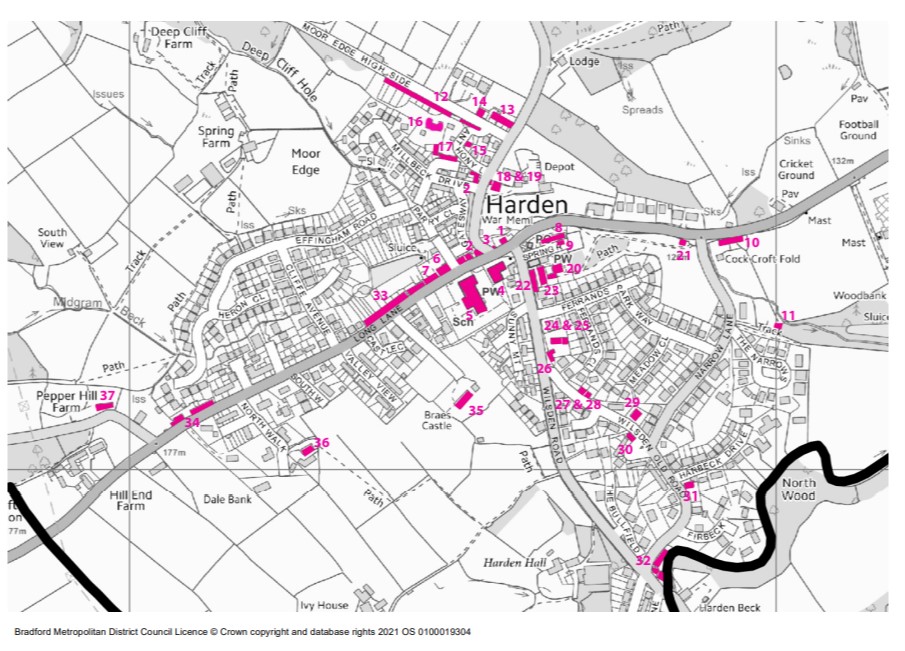 Stone walls, including areas of historic dry-stone wall should be retained and restored using local stone and traditional techniques wherever possible in new developments or in refurbishments.

6.2.8 Dry stone walls are a defining feature of Harden that contributes to the rural character of the village. This policy seeks to ensure that existing stone walls are retained, wherever possible, where planning permission is required.'

6.2.9 For over 300 years quarrying was prominent on the western edge of Harden Moor with many quarrymen residing in the hamlet of Ryecroft. Yeadonian Sandstone quarried here was used to build many local buildings and dry stone walls. Stone was also quarried in Harden to help build Saltaire. 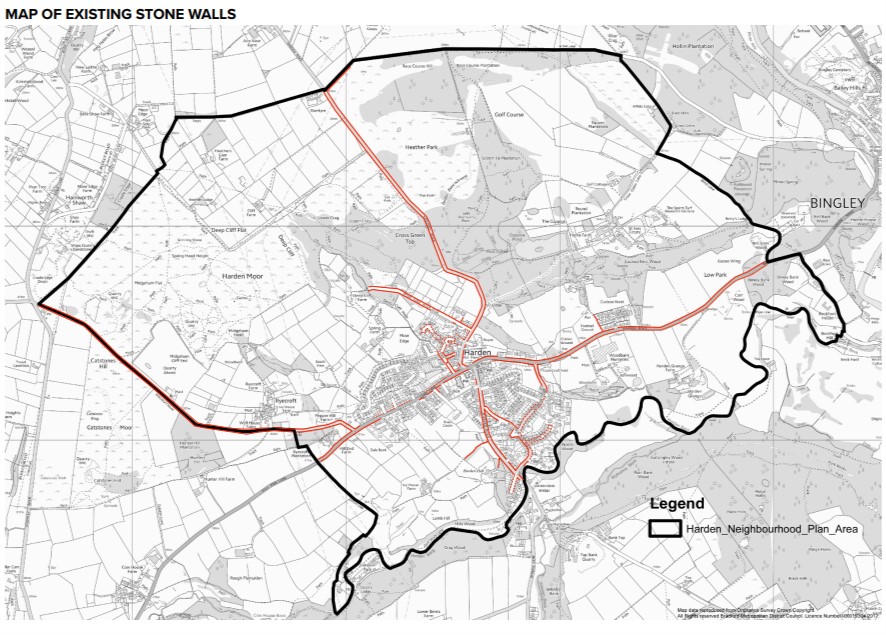 The views and vistas within Harden village and into Harden village should be retained. Development affecting these views and vistas should be designed in such a way so as not to have a significant adverse impact on their visual quality and amenity. Applications should demonstrate any impact development proposals may have on the views identified below:

6.2.11 The local topography and landscape provide many great views and vistas of the surrounding area. These are highly valued by residents and visitors and contribute to the rural character of Harden.

6.2.12 The views included in this policy have been suggested by members of the project group. A key view assessment has been undertaken using the Ryecroft Conservation Area appraisal and the Wilsden Landscape Character Supplementary Planning Document, and is contained in the evidence base and appendix to the Neighbourhood Plan. The views included in this policy are non-exhaustive and may be added to or amended in the future. 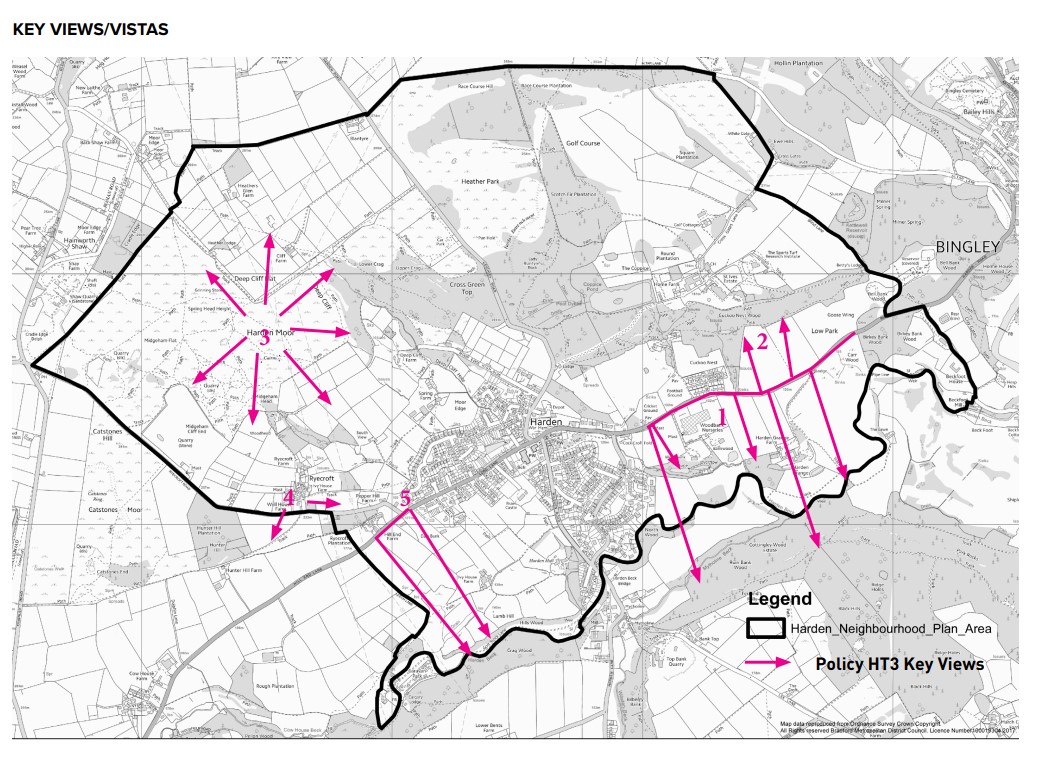